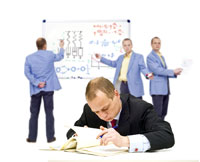 Teams are supposed to work together flawlessly, share the workload, be collaborative, and watch each other’s backs. Operative words, supposed to. At least this is the theory. As we all know from school, theories are just that. Once we’re out of school theories go to hell in a hand basket and reality sets in. Let’s look at a few realties, what they are and how to deal with them.

Theory 1. Your team is working well together. Members are collaborative, cooperative, and respectful of one another and their ideas. In addition, if one member stumbles or has a problem, all or at least one other team member is there to take up the slack. Well, these descriptions are true except for one team member. Pat is argumentative, doesn’t pull her weight, and is pessimistic. Pat does not like teamwork, constantly misses deadlines and thinks the team meetings are boring. Behaviors such as these can bring morale down like a ten-story building imploding on itself.

Pat’s CEO values her as a competent employee. His solution? The CEO decides to allow Pat to skip all team meetings. He then spends extensive time both getting input from Pat before team meetings and then filling Pat in after team meetings. Seriously? This is hardly the best use of a CEO’s time. Further, this will only encourage Pat to have her own way about any other activity in which she doesn’t want to take part. In essence the CEO is condoning Pat’s behavior and may even be paving the way for other executives on his team to act out.

A better idea is to send Pat to interpersonal skills training. If that doesn’t do the trick, then coaching may be in order. In fact, it could come down to the reality that Pat either participates in a coaching program or loses her job. If Pat refuses or if the coaching doesn’t convince Pat that her behavior is inappropriate, then it’s time to look for a more cooperative executive to fill Pat’s position.

Theory 2. Another theory is that the members of executive teams know one another and are sure who is on the team. According to research, involving over 120 executive teams, this is not the reality. Often the CEO is a contributor to this by adding team members for political reasons or putting people on the team who do not need to be a part of a particular team.

A better idea is to perform some due diligence before a team is formed. This due diligence means analyzing if a team is even necessary for the task at hand. If a team is the right solution, then determine the team members who should be on the team. These are people who are high performers and who have the right combination of talent and expertise to achieve results. If it wasn’t done at hiring, then administer assessments to the potential members to determine the right mix of behaviors, skills and attributes to achieve the work the team will be charged with accomplishing.

Theory 3. Theory three alludes to the musketeer mantra, “All for one and one for all.” It is widely believed that teams do not or should not have any penchant or thought for individual rewards. Of course, nothing could be further from the truth or reality. Even in my work with international coaching clients reveals that while their countries of origin would have you believe that there is no concern for individuality or individual achievement, it is a fantasy of their leaders. Everyone craves recognition and reward in some form for their individual efforts.

In reality, recognition for the entire team, a group within the team and individual high performance efforts can all be rewarded without any damage to the spirt of all that the term team evokes. Furthermore, studies indicate that having these rewards in place helps adults increase interest in their jobs. Creating this level of interest increases employee engagement thus leading to an increase in productivity and profitability.

While team theories abound, it is wise to remember that teams are made up of individuals. Because someone becomes a member of a team does not change their inherent humanity or the reality of what motivates them. Team membership may somewhat modify individual behavior, but not the core of who each individual team member was or will continue to be either during or after team membership ends. That is reality.

Thank you for reading this blog. If you want more information on my Tandem Team program emails This email address is being protected from spambots. You need JavaScript enabled to view it. call 404-320-7834 or visit www.performstrat.com .